Kintsugi or Kintsukuroi is the Japanese art of repairing broken pottery with lacquer dusted with precious metals like gold, silver or platinum. The philosophy is to treat breaks and celebrate them as part of the story of an object rather than throwing it out just because it’s had a rough time. Kintsugi literally means golden joinery in Japanese.

Ashikaga Yoshimasa was a Japanese military commander in the late 15th century who sent his favourite tea bowl to China for repair. When it came back with large clunky staples he charged his craftsmen to find a more ascetically pleasing way to repair the bowl. 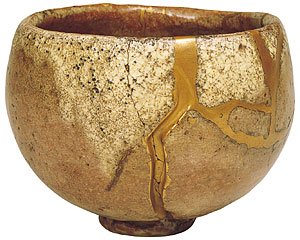 They came up with Kintsugi, a means of repairing a break that celebrates the repair as a thing of beauty rather than trying to pretend that it never happened. This repair philosophy aligns with the Buddhist based view of Wabi Sabi, a means of finding beauty in things that are flawed and imperfect. While Wabi Sabi concepts are religious in origin they are actually a very casual and mainstream concept in modern Japan. This approach means we can learn to embrace rather than disguise damage and imperfection, as they are inevitable in ceramics, in life and certainly with our hearts.

Can we go one step further and apply Kintsugi to our own fragile human hearts? I like to think we can. After all it was Ernest Hemingway who said “The world breaks everyone and afterward many are strong at the broken places. But those that will not break it kills.” So it seems that breaking is essential not only to grow but also to cope or just merely exist so we might as well embrace the breakages and wear them with pride.

We have all had our hearts broken many times over many things. It is not only romantic love that leaves scars on our hearts. I like to think that I have loved hard and that every break serves to make my heart stronger and more beautiful. This also means I will love again because it can only make my Kintsugi heart more beautiful