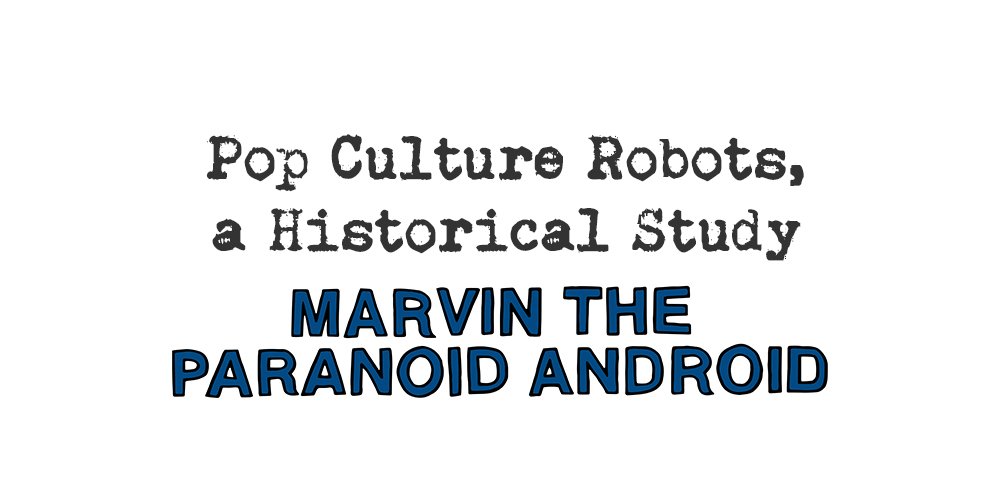 Marvin the Paranoid Android is a ship’s robot aboard the starship Heart of Gold in Douglas Adams’s classic series The Hitchhiker’s Guide to the Galaxy (1978), a radio show that was originally broadcast on BBC Radio 4 in the United Kingdom. The series was hugely popular and was later made into a TV Series (1981), a series of novels, a computer game, music releases and a big blockbuster movie (2005).

Marvin was originally a failed personality prototype who suffers from severe depression and boredom, in part because his brain is so big, in fact he has a “brain the size of a planet”. Apparently Marvin is 50,000 times more inelegant than any human and 37 times older than the universe (due to time travel).

The 1978 vision of Marvin was a tall humanoid robot with a large square head but he was reimagined for the 2005 movie. In the movie he was short and stocky with a giant round planet-like head. I love both incarnations of Marvin… but perhaps I prefer the movie version just a little bit more 😛 .

Marvin is racked with depression and suffers incredible pain due to the diodes on his left-hand-side never being replaced. His brain is woefully under-utilised and he occasionally writes music… in his track <<Marvin>> he references his pain with the lyrics “Nothing left to be enjoyed, every diode rheumatoid, Marvin.”
Listen for yourself…
[youtube id=”hTXOW_jJdKE” maxwidth=”1000″]
Marvin also wrote lullabies…

Now the world has gone to bed,
Darkness won’t engulf my head,
I can see by infrared,
How I hate the night.

Now I lay me down to sleep,
Try to count electric sheep,
Sweet dream wishes you can keep,
How I hate the night.

If by some freak of nature or because of a horrific laboratory accident you haven’t yet seen the 2005 movie then do yourself a favour. I can watch it again at any time… I just love it. Narrated by Stephen Fry and starring Martn Freeman, Zooey Deshanel and Mos Def, it’s one of my all time favourite modern reimagining of a classic Sci Fi tale. Here is the trailer…
[youtube id=”MbGNcoB2Y4I” maxwidth=”1000″]

While it’s hard to choose a favourite character in such a rich and fun filled tale, you can’t imagine this story with out the depressing and pessimistic voice of Marvin keeping everyone’s optimism in check.
I will be publishing 15 robot profiles over the coming weeks. Feel free to share on social media (please link back to my site).